Artificial intelligence (AI) bears the potential to fundamentally change business models and accelerate the pace of innovation in companies. Thereby the technological possibilities are constantly evolving. We look back at what has happened so far – and forward, to see where the journey is heading.

As businesses transform digitally, there is growing interest in AI technologies that are already being used in a variety of industries. Specific applications can be found, for example, in medical diagnostics, in the field of autonomous driving or in predictive maintenance of machines. The DARPA, a major financier and driver from the outset, divides the development of AI into three waves. The concept illustrates how much AI has changed – and how it could evolve.

In this first development phase of AI, patterns were still manually inscribed into computer systems and correlations, so-called if-then relationships, were manually defined.

Initial expert systems and, in particular, rule-based systems have been developed – i.e. computer programs that derive recommendations for action from a knowledge base and are able to support the solution of more complex problems.

As an example of a first "rule-based chatbot", ELIZA (1966) was the first software capable of conducting an English-language conversation. However, expert systems have only been used commercially since the 1980s.

The impressive progress and the fast first successes caused a real euphoria and great confidence in science and scientists to create an AI. The researcher Marvin Minsky, at that time one of the leading minds, declared as early as 1970 that it would only take three to eight years until there would be a machine whose intelligence was equal to that of humans. Looking back, this statement turned out to be very ambitious.

Although the beginnings were promising, there was no real breakthrough as a complete AI solution. In the mid-1980s, many of the former donors withdrew and stopped their efforts due to the lack of commercial usability of solutions at the time.

The two major obstacles to successful projects consisted of the storage capacity and computing power of those computer systems. Thus the 1st wave of AI remained mainly an academic discipline, and investments were primarily made in scientific circles. During this time the theoretical foundations were laid. But the increasing difficulty to raise research and development funds heralded the beginning of the first so-called "AI winter" after DARPA's lack of support.

While scientific research on artificial intelligence hardly produced any new publications and findings, other areas equally relevant to further development progressed enormously. Between 1990 and 2010, compute power and memory capacity became increasingly affordable, which also meant a real boost for the research and development of the AI. Awake from its proverbial hibernation, the topic returned onto the agenda.

Visible result of this time: Deep Blue (1996), IBM's chess robot, which defeated the legendary world chess champion Garri Kasparow in a single game. Fourteen years later IBM's AI system Watson (2011) beaten all reigning chess champions at that time during a TV show. In doing so, Watson demonstrated the recognition of images, the understanding of natural language and the reasoning based on information.

As memory and computing performance improved, it became possible to apply adaptive statistical models to large amounts of data, to model structures in these data, and to make predictions based on them. This has led to the development of machine learning, which is now in productive use by every fifth company. Within the next four years, a tenfold increase in the value added share of this "commercial AI" is predicted.

In recent years, the term deep learning has become popular, the research discipline of deep neural networks. In 2011, they created the initial momentum for a new comprehensive interest in technology, from business to politics. Since then, research and development have gained considerable momentum.

In contrast to the first phase of AI, today there is a continuous flow of new data, mainly due to cloud computing, low-cost and at the same time enormously powerful compute power, and the steadily increasing individual use of the Internet. The comprehensive evaluation of these data now makes deep learning completely possible: machines learn independently and expand their knowledge due to their own data interpretations bye building focal points or clusters within the data input.

With the continuous further development, the need for improvement also increases: "At present, neural networks are still black box approaches that are not well understood. If you have 10 million neurons containing connections, you cannot find out in a whole human life what led to this and that decision," *um Data Scientist Ulf Schoeneberg describes a crux of statistical or machine learning. (This animation also illustrates how complex such systems are.)

To "demystify" and to understand how and why an algorithm generates results, is one of the upcoming challenges and will be a major boost for the third wave of artificial intelligence.

Considering the increasing number of safety-relevant applications, such as autonomous driving, the so-called Whitebox AI is of crucial importance. As a logical consequence, the properties of explainability, argumentation and abstraction will come to the fore.

One of these approaches to improve the explainability of statistical models is LIME, Local Interpretable Model-Agnostic Explanations. It is used, for instance, in medicine, where diagnoses can be made on the basis of patient data such as age, weight or lifestyle and where the probabilities of diseases can be determined. LIME enables to bundle the essential factors of the diagnosis and to justify a result on the basis of individual data points. It exemplifies a first holistic, contextual understanding of data and indicates the dimensions of the third wave of Artificial Intelligence, which will go considerably beyond the previous wave. 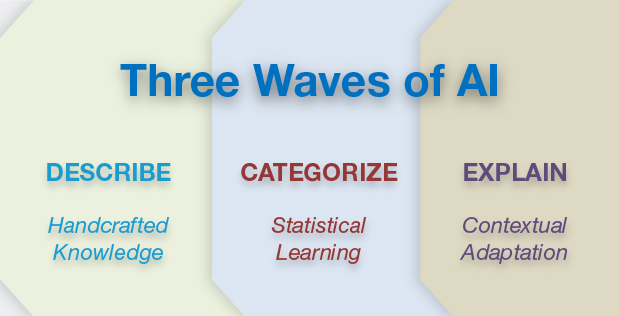 When are we going to ride the 3rd wave?

The journey on the waves of Artificial Intelligence continues. The development accordingly, too. "At the moment we find ourselves in the middle of the second wave," marks *um Data Scientist Oliver Rieger. "Like the achievements of the first wave, it is already an integral part of the AI strategies of many companies."

Concerning the outlook he states: "The third wave will further develop the symbiosis between man and machine and produce systems that can react in dynamic surroundings, adapt contexts and understand their environment." Increasing touch points between artificial and human intelligence, for example in assistance systems or autonomous driving, also require the system to be able to seamlessly substantiate its assumptions and motivations.

In our recent study "Machine Learning in German Companies – Operation and Application of Artificial Intelligence", we provide an empirically substantiated overview of the current integration status of AI solutions. As well it shows how companies will use AI in the future.

Overview
What is a digital twin?
Brave new world: technologies that are shaping the future factory